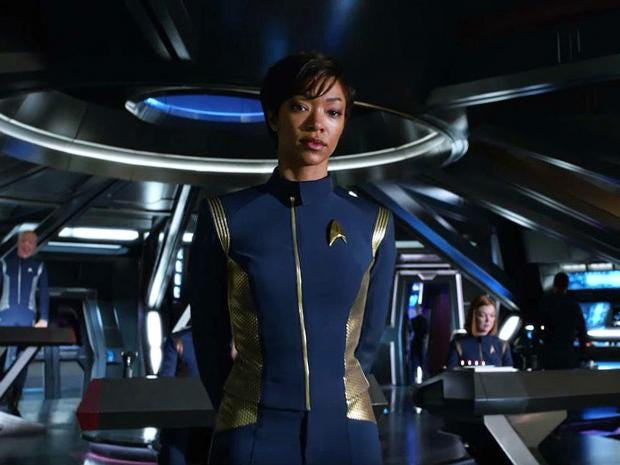 The storytelling is sometimes messy. The tone is often heavy-handed. The production woes show through at times (especially in episode two). The uniforms are far from sensational. The Klingons look weird. Michelle Yeoh is still nowhere near as strong a performer when she’s not working in her native language. The visual aesthetic is a bit too dark at times. Someone should have realised that the Klingon language is no fun to listen to for extended periods.

There’s been some very strong reactions to Star Trek: Discovery – both positive and negative – and one of the most common negatives I’ve heard is ’this isn’t Star Trek’. Which is weird, because what it reminds me of most three episodes in – especially in part 3, the strongest episode yet and one of the best bits of Trek I’ve seen in ages – is the old ‘Classic Crew’ movies, especially Star Treks II and VI, which really played up the naval and ’submarine war’ aspects of life on the Enterprise. It’s no surprise, considering the director of Treks II and VI, Nicholas Meyer, is a consulting producer, and it’s a pleasure for me, because that’s my favourite flavour of Trek.

I’m not really a ‘fan’ of Trek. I enjoy the hell out of it when it works, but I’ve never followed it religiously. The Original Series never exerted the pull on me that Doctor Who did when I was a child, The Next Generation had a two season run (end of S3 through to beginning of S5) when I watched it regularly, but then I drifted away, and I never clicked with DS9, Voyager or Enterprise. The 2009 reboot gave me a brief sugar rush of excitement that wore off pretty quickly, especially when I rewatched it and realised how shoddy some of the storytelling in the movie is, and I did think for a while that Trek had been lost to the world of shallow wham-bang blockbusters.

And now we have Star Trek: Discovery, which is far from perfect, but is genuinely trying to revive the old-school nature of Trek – that it’s humanistic morality tales in a pulp sci-fi wrapping – and the results are more often successful than not. I think some fans are struggling with the fact that (a) the emphasis so far is on war, and (b) that we’ve gone back to before the original series again, and (c) IS IT CANON? To which I’d say, (a) this is a character-centric 15 episode series with what’s meant to be a self-contained, clear arc, where the central protagonist is obviously on a difficult journey of healing and redemption, (b) going back to war with the Klingons helps because that’s one of the archetypal Star Trek set-ups that almost everybody knows, and (c) this is pretty much another soft reboot, at least from an aesthetic perspective (for example – Star Fleet now have Star Wars-style holograms now, to avoid endless scenes of people talking on screens). They’re trying to meld the approach of the Classic Crew movies with the visual flash of the Abramsverse, and the results are pretty good. Of course diehard fans are going to complain – hells teeth, I’m a Doctor Who fan, and in that fandom, diehards complain about ANYTHING.

But the third episode hints that despite some clumsy teething troubles in part 1 and 2 – especially some murky world building around the Klingons, who now seem to have a weird Egyptian Death Cult thing going on (and also seem to be big fans of the over-opulent production design on The Chronicles of Riddick) – Star Trek: Discovery may be on to something, especially in the way it’s pushing its main character into some really difficult and challenging directions. Episode 3 also makes it clear why episodes 1 and 2 were kind of a self-contained ’set-up’ story, because all the heavy lifting done there really pays off. Sonequa Martin-Green is doing impressive work in the lead role, Doug Jones is wonderful as Saru, and this is the kind of story we haven’t seen before in Star Trek. There’s a long way to go – whether episode 3 points to how good the show could be or just turns out to be a quality blip remains to be seen.

For now, though, while I’ve never been a ‘true’ Star Trek fan, I’m enjoying Discovery, and I’m glad that there still seems to be room in today’s TV environment for a return to Trek’s intellectual and humanistic (if occasionally clunky) space adventuring.