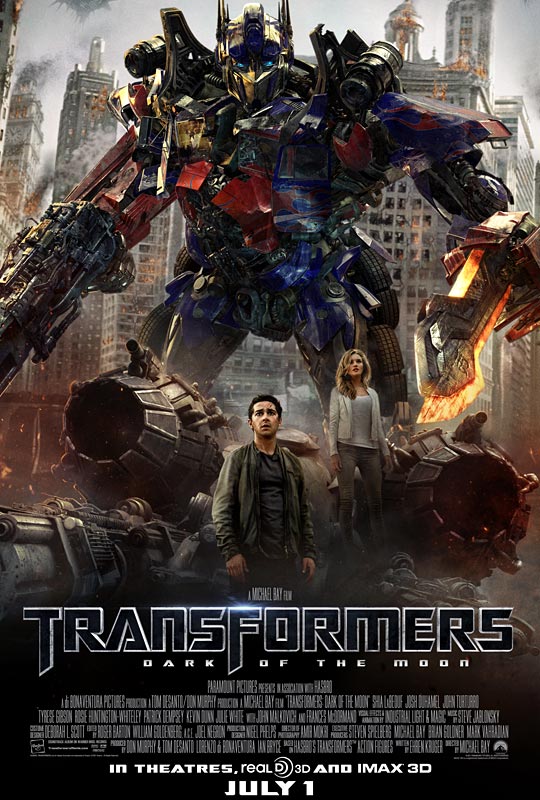 The Low-Down: The third in Michael Bay’s profitable yet reviled series of action figure-inspired blockbusters, Transformers: Dark of the Moon is a swaggering, belligerent buffet of summer spectacle that’s as sure to please its core audience as it is to alienate and anger everyone else. Non-believers need not apply.

What’s it About?: With Optimus Prime and the heroic Autobots enshrined as protectors of Earth, human ally Sam Witwicky (Shia LaBeouf) is having trouble finding a job and adjusting to the demands of a normal life. But trouble is on the way for both parties when Cybertronian technology is found on the Moon: a discovery that leads to the uncovering of a decades-old conspiracy, the return of a legendary Autobot hero, and a full-scale invasion of Earth…

That’s the thought that occurs when stepping out of Transformers: Dark of the Moon, ostensibly a commercially-driven, wide-appeal action movie, but one which turns out to be a towering $200 million edifice carved in the director’s own image. After all, this was supposed to the movie that saw Bay returning cap in hand after the critical mauling of Transformers: Revenge of the Fallen, a film that had its coherence torpedoed by the2007-08 Writers Guild of America strike, and which the director himself has admitted was “crap”. Pre-release talk for TF3 has been awash with pledges to right the wrongs of that misbegotten mess, to make amends, to learn lessons. 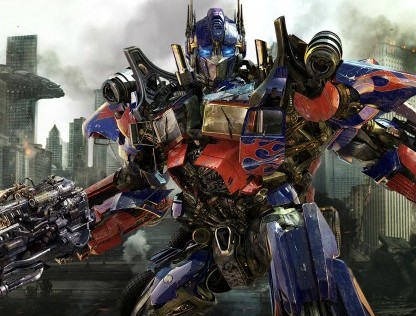 As it turns out, the very last thing that Dark of the Moon can be described as is “contrite”. Simply put, this is exactly the same kind of excess-riddled orgy that’s defined Bay’s career, but blown up to a scale that feels like an act of deliberate defiance. It takes every element you’d expect from a Big Dumb Action Movie and feeds you an unending supply; by turns, Transformers 3 is a sci-fi potboiler, a comic-book movie, a frat-boy comedy, a 1980s kids’ cartoon, a war film, a music video, a car commercial and everything in between. In IMAX 3D. Sensory overload doesn’t begin to cover it.

Bay’s vision is almost admirable in some ways. There’s an insanely single-minded drive throughout this series to deliver the absolute maximum amount of entertainment per second as possible, but Bay simply doesn’t have the word “stop” in his vocabulary; he keeps dropping more and more into the mix, until you’re left with the cinematic equivalent of a Christmas pudding-flavoured gateaux encased in chocolate and coated in Pringles. Money shot follows money shot, comedy sidekicks have their own comedy sidekicks, while the final hour – chronicling a massive-scale Decepticon invasion of Chicago – is essentially one long, mad, escalating action sequence.

Of course, the major issue here is not that the film tries to entertain; it’s the commitment to Michael Bay’s definition of “entertaining”, which can be extremely abrasive to anyone lacking his testosteronal sensibilities. Bay’s Transformers universe is an aggressively masculine wonderland of explosions, brutal violence, lasciviously-filmed cars and women and a juvenile, stereotype-loving approach to comedy, which will clearly rankle with a great many audience members. There’s nothing as show-stoppingly sophomoric as the leg-humping, testicle-endowed robots of Revenge of the Fallen, but there’s still enough of an abundance of effete Germans, Asians named “Deep Wang” and screaming, perma-tanned John Malkoviches to cause pain.

So Dark of the Moon is riddled with easily foreseeable flaws? Well, of course. But honestly? I get the feeling that this is exactly the movie that Michael Bay set out to make. Transformers 2 was the one that got away from him; part 3, on the other hand, is clearly the work of a director at the top of his game – regardless of whether or not that’s a game you’re interested in playing. It’s interesting to compare this to something like, say, the recent Green Lantern – neither movie has been warmly received, but where Lantern was a confused, mumbling, deflated excuse for a film, Dark of the Moon has a strutting, unthinking arrogance and confidence that demands your attention, if not your approval. It believes in its vision and doesn’t much care if you disagree.

It’s a belief that manifests itself, for example, in the casting, which wheels out a procession of big-name stars who are surely here for the paycheque – Malkovich, Frances McDormand, John Turturro, Patrick Dempsey – but who nevertheless refuse to phone it in, annihilating the scenery with the same indecent ferocity as Bay himself. It’s also evident in the sheer scale of the action choreography, which renders toppling skyscrapers, shape-shifting freeway chases, vertiginous wingsuit flight sequences and scenes of city-spanning urban destruction with obscene levels of care and expense, all rendered in top-quality 3D. 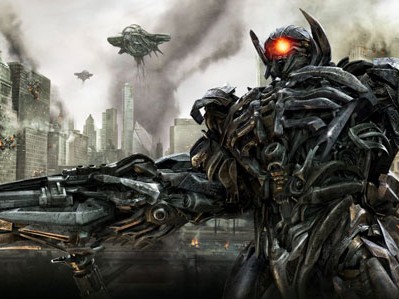 What underpins this confidence, ultimately, is Bay’s knowledge that he has succeeded delivered a far better film than Revenge of the Fallen, for all that’s worth. Partially, this is due to refinements in his own directorial style – possibly due to the demands of the 3D cameras – that see him slowing down his frenetic editing to deliver sharp, clear and balletic action sequences. But primarily, it’s due to the fact that this film has the advantage of an overall story structure that actually makes sense, delivering the hokey but fun alien conspiracy/invasion tale that Transformers 2 tried and failed to convey. It’s certainly no masterpiece, but the presence of a clear three-act structure – even a ludicrously flabby one – does help to contextualise the robot mayhem, even enabling a couple of reasonably surprising twists. Of course, Bay being Bay, enjoyment of Transformers: Dark of the Moon’s story is dependent on your ability to overlook a number of gaping logic holes, but it’s still streets ahead of Revenge of the Fallen, which featured a plot that wouldn’t stand up to a stiff breeze. It’s also dependent on you not having grown tired of Shia LaBeouf’s fast-talking shouty everyguy schtick, which is often dialed up to unpalatable extremes, although while the new scantily clad, absurdly over-attractive female lead Rosie Huntington-Whitely (replacing terminally outspoken Transformers 1+2 star Megan Fox) won’t be winning any acting awards, she also doesn’t disgrace herself either with a performance that’s nowhere near as horrendous as some of her harsher critics would have you believe. 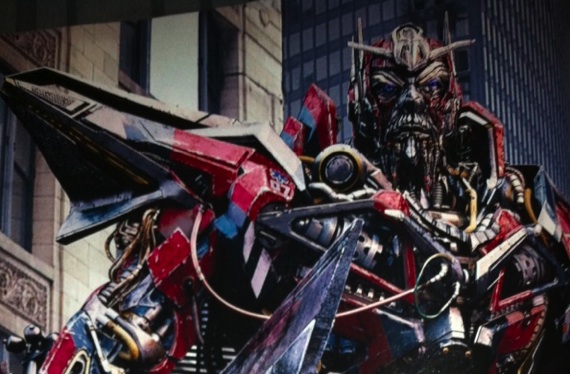 Still, if there’s one prevailing and crucial failing that’s never really addressed, it’s the limited role played by the Transformers themselves in all of this. Bay made a virtue of keeping them hidden for most of his original 2007 Transformers film, instilling the robots with a sense of awe and wonder; since making that reveal, he’s seemed unsure of what to do with them, and has disappointingly settled on using them as walking setpieces, rather than actual characters. The Transformers canon can be a messy and disparate affair, but there are still plenty of strong personalities among the Autobot and Decepticon rosters that never get a look-in here. Dark of the Moon has the most robot-to-robot interactions of the series, but most ‘bot characters barely qualify as one-dimensional – the notoriously treacherous Decepticon lieutenant Starscream, for example, doesn’t do any backstabbing in the whole trilogy, while the much-hyped antagonist Shockwave is a red herring non-event. Those with the screentime to impose themselves, meanwhile, often fall victim to misuse and misinterpretation, with the emasculated villain Megatron and the overpowered, distressingly violent Optimus Prime counting as the main victims. Worse still, the fact that this is likely to be Bay’s final Transformers has brought out a vicious streak, leading to a procession of cold, cruel and slightly undignified character deaths, which in most cases feel unworthy of their victims. The robots look great, thanks to fantastic design work and some of ILM’s best effects, but gripes are inevitable when a film’s title characters feel like supporting players at best and cannon fodder at worst.

At the end of it all, it’s hard to know how history will regard the trifecta of Bay-helmed Transformers movies; they’ve been blockbuster successes have likely bankrolled the Hasbro toy franchise for the next decade, but one suspects that the tentative mainstream goodwill towards the series created by the 2007 film, before Revenge of the Fallen tarnished the brand, may never return. With its manifold flaws, Dark of the Moon isn’t going to change that, but Bay will no doubt be satisfied to have departed the franchise on strictly his own terms, heading off to pastures new with a trail of box office records, fuming critics and exploded wreckage in his wake. You suspect he wouldn’t have it any other way.

The Verdict: Completing its (unambitious) stated mission of bettering Revenge of the Fallen, Transformers: Dark of the Moon is a film completely at peace with what it is: a shallow but state-of-the-art action spectacular that dispenses the Michael Bay brand of cheap gratification like sickening candy. Good times are available to those willing to submit; everyone else, stay far away, and save yourself the money on tickets and aspirin.