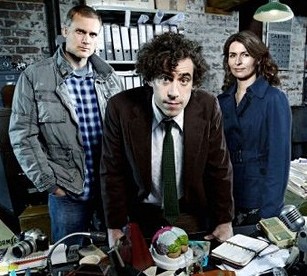 The Low-Down: Hitch-Hiker’s Guide to the Galaxy author Douglas Adams’s other bizarre creation is brought to the screen here in a brave but ultimately deeply flawed one-off drama, a pilot episode for a potential series of bizarre and whimsical sci-fi investigations.

What’s it about?: Eccentric detective Dirk Gently believes in the fundamental interconnectedness of all things. He also believes in attempting to politely swindle old ladies out of money in order to track down their missing cats… but how is his latest runaway feline also connected with his old University friend Richard Macduff, a missing multi-millionaire, a time machine, and an exploding warehouse?

The Show: Douglas Adams is very much one of those ‘tricky to adapt’ authors. You only have to look at the movie version of The Hitch-Hiker’s Guide to the Galaxy to see how things can go wrong, and while I can salute anyone with the bravery to take on the task of adapting the fantastically bizarre Dirk Gently’s Hollistic Detective Agency to the screen, at the end of this BBC4 drama (a pilot for a prospective series) Adams remains resolutely un-adaptable.

It’s partly his unique narrative voice. It’s partly the fact that his plots were almost always mad improvisation that could go off on abrupt tangents at a moments notice (and thus don’t fit into traditional narrative structure very well). And it’s partly the fact that Adams’ universe is (despite his wonderful, spritely and creative humour) a seriously dark place, where horrible things can happen out of nowhere, and fate regularly has the last laugh. Not the kind of world-view that’s easily plugged into a quirky detective saga, which probably explains why it’s almost completely absent from this 1-hour pilot episode.

Misfits writer Howard Overman is sensible in not attempting to do a straight adaptation of the original Dirk Gently novel (especially since the plot goes in some fantastically complex directions), and one of the most surprising things about this TV outing is how much of the original novel is present and correct. He’s retooled Dirk (Stephen Mangan) as a kind of free-wheeling, quantum mechanics-inclined version of Sherlock Holmes (with a remixed and far less capable version of novel character Richard MacDuff (Darren Boyd) as his dim-witted Watson), and it’s easy to see this as a project that got comissioned in the wake of the success of this year’s modern-day reboot of Sherlock.

Overman pulls off some good lines, and there are a couple of very Adams-style bits of invention (especially the final fate of the cat Dirk is searching for), and he’s also oddly restrained in certain areas – Seargeant Gilks, a fantastically angry policeman and nemesis of Dirk, is so underplayed here as to be barely present. He also does his best to reformulate Adams’ twisty plot into an easier-to-follow story of second chances, while trying to set up Richard Macduff as a slightly dazed straight-man to Dirk’s off-the-wall insanity.

Trouble is, if you take the darkness out of Adams, what you’re left with is a little too much of a sitcom (particularly with the scenes featuring Dirk’s elderly client), a wacky Holmes-style romp that features plenty of running around and comedy shouting, but is mainly built around a relationship – Richard and Susan (Helen Baxendale) – that we don’t care about, and don’t really believe for a second. Combine this with the fact that the ‘fundamental interconnectedness of all things’ turns out to be a shorthand for ‘hard-to-swallow coincidences’, and the plot ends up a fitfully entertaining but not exactly succesful comedy mystery that occasionally lurches into life, but too often comes to a juddering halt.

Pilot episodes are notoriously tricky, of course, and this wouldn’t be the first one to feature creaky storytelling. What sinks Dirk Gently – at least, as an adaptation of Adams’ work – is Dirk himself. Again, it’s no surprise, as Dirk is an emphatically odd character, a mass of contradictions who isn’t even the main protagonist of either of his novels, but the changes Overman makes give us a version of Dirk that’s oddly shaded and doesn’t really work. Dirk is portrayed here as a smarmy, over-confidant but occasionally brilliant trickster, and Mangan isn’t always capable of pulling off the weird cadances of Adams’ dialogue (he’s mostly better with lines that aren’t directly from the book).

Admittedly, the original character is quite definitely a con-artist – but he’s also a notoriously bad one. Most of his attempts backfire in bizarre ways (like the college exam papers he faked as a clairvoyancy scam at University that turned out to be, word-for-word, exactly the same as the papers that were set), as if the universe is constantly preventing him from getting away with it – and it’s also strongly insinuated that he’s rarely been capable of getting any of his clients to actually pay any of his outrageous bills.

Overman skips most of this, making the confidence trickster side more overt, but Dirk stops being quite so interesting, and becomes a lot harder to sympathise with. He isn’t the mercurial figure in the books – he’s just a fast-talking con artist who occasionally gets lucky. It doesn’t help that Mangan isn’t the most likeable of leads, and ending the pilot episode with Dirk using hypnotism to swindle Richard of 20,000 quid for a holiday in the Bahamas doesn’t do anything to change that.

Add in some awkwardshifts in tone, intermittent physical comedy and a general sense of inconsequentiality, and the end result is one of those loose adaptations that has its fun moments, but on the whole doesn’t get anywhere near the odd energy of the original work. It’s always possible that there may be a series – and that Overman may be able to develop this world in some interesting and stronger directions – but going by this opening outing, I’d be very surprised…

Verdict: It’s a step up from the truly dreadful Radio 4 adaptation (which starred Harry Enfield as Dirk), but a few funny lines and a smattering of inventively off-beat sci-fi strangeness does not a series make. Combine that with a miscast lead actor and this oddball confection never gets its act together for long enough to live up to its intimdating (and far superior) source material.